for the professional and serious amateur rider
Menu

Our super dressage stallion, GreenLanes Jester, attended the British Breeders Stallion Event at Addington along with about 70 of the countries top sport horse stallions.  He had a lovely time meeting the public and had a lot of attention from the people who visited him, behaving as always like the perfect gentleman he is!  It was a long day with the stables open to the public from 12.30  – although a few came in a little earlier – and he was giving his ridden display in the arena at 5.00 p.m.  He is such a laid back character we were a little worried that he would be too tired to give a good display, but he was excellent and his rider, Josh Hill, gave him a lovely ride around the arena showing off some of his great paces and moves. 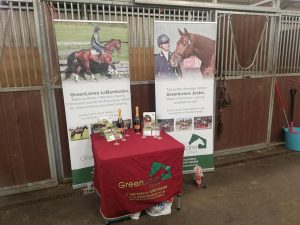 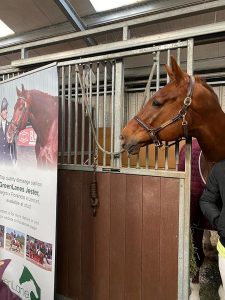 Jester will be at public stud again this year although he will also be kept in training and competing so his availability for fresh and chilled semen may be more limited  than last year, but we do have some frozen semen available on the same terms.  If you would like to book to use him, please complete the nomination form on his stallion page (click here) and let me know when you are anticipating using him so we can try to keep him clear of competition if possible.

Click this link to see the video of him performing at the stallion show.